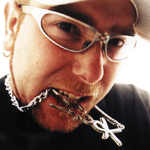 Beat-based pop crew LEN is anything but straight. In a world where Busta Rhymes can fly and Marilyn Manson leads an army of bitter fifteen-year-olds, LEN’s Work Group debut reflects an attitude that has long disappeared in this industry. Drawing its inspiration from juice commercials to the Juice Crew, You Can’t Stop The Bum Rush, is a fun trip of old-school hip-hop, electronic machinations, and bastard beats.

Where most albums today follow a standard formula for success, You Can’t Stop The Bum Rush defies convention, creating a musical hybrid that transcends genres. From the candy-coated ultra pop of the group’s first single “Steal My Sunshine,” also featured on the “GO” soundtrack, German-language electro-plink “The Hard Disk Approach,” loathe song “Big Meanie,” the romantic soul of “Junebug,” to the jurassic old school-stylings of “Cryptik Souls Crew,” LEN travels across the musical spectrum while remaining introspective. It’s a headphone album and party album, all in one.

Built by The Burger Pimp, his sister Sharon, D. Rock, Planet Pea aka Kudu5, DJ Moves and Canada’s own Drunkness Monster with ancient tools in their secret laboratory in the heart of Canada, You Can’t Stop The Bum Rush is an album that is innovative and insane, catchy and confounding.

It was mixed by the Dust Brothers’ John King (Beastie Boys, Hanson, Beck) in Los Angeles. The one track that wasn’t, “Feelin’ Alright,” was engineered by John X (Ice Cube, Korn, Dave Navarro).

The crew was assisted by DJs Buck65 and Mr. Dibbs (named one of 1999’s Top Ten turntablists in the world by SPIN magazine), and employed the vocal chords of the diabolical Biz Markie (Beautiful Day/Man Of The Year), Kurtis Blow (Cold Chillin’) and glam of Poison clan member C.C. DeVille (Feelin’ Alright).

LEN was born in 1991 out of Ontario, Canada. The Burger Pimp and Sharon initially formed as a noise-driven punk-pop group while honing their beat-making skills with longtime friends/musicians on the East Coast of Canada. From 1992 to 1996 LEN would release one EP and two albums on their own label. Releasing 1996’s Get Your Legs Broke, with innovative indie self-directed videos for “Smarty Pants” and “Trillion Days,” they continued mining hip-hop grooves on the side and releasing other hip-hop acts on The Burger Pimp’s own Four Ways To Rock label. “We sold 10,000 to 15,000 every time we released a record,” The Burger Pimp reveals. Such success from the other side of the contractual line had them medium-rarin’ to postpone their behind the mic experience in favor of full-time label minding.