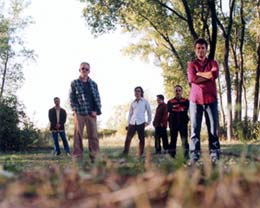 One of the most recognizable Canadian bands due to tremendous amounts of radio airtime and an easy-listening sound that is recognized nation wide, Blue Rodeo has been performing together for over twenty years.

Though they met in high school, Jim Cuddy and Greg Keelor, Blue Rodeo’s two founding members didn’t perform together until after their university graduation. In 1977 the two began Hi Fi, a band that eventually moved to New York and changed their name to Fly to France. After endless self-promotion and sending packages to record labels, they managed to get four demos recorded and returned to Toronto to look for a record deal.

In 1985, the band Blue Rodeo was formed after the addition of a couple of old friends from the Toronto music scene. Cleave Anderson and Bazil Donovan joined to perform their first gig on Toronto’s Queen Street. After working the scene for a couple of years, WEA Music of Canada signed a deal with Blue Rodeo and their album Outskirts was released later that year. The hit song “Try” was part of that album that quickly went to double platinum status in Canada.

Touring with kd lang during the promotion of Outskirts helped the release of the second album Diamond Mine which was released in 1989.

Blue Rodeo received a number of Juno awards that year and were well on their way to success. 1990 brought about the release of ‘Casino’ and the first time that they were to have a break into the US market. Though the American market was and has been bit difficult to break into, there were no problems in Canada. The album reached platinum sales in no time.

The 90s brought four more albums from Blue Rodeo. Lost Together, Five Days in July, Nowhere to Here and Tremelo all which were consistent with what fans had grown to appreciate and expect: the best example of a country rock group – the band is neither but they are both.

Their latest album, ‘Days in Between’ has received mixed reviews though to the die-hard fans that the band has created it is another hit.