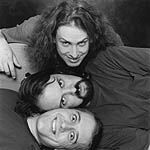 Since then, they have released five other albums: Russell’s Shorts, C’est Cheese, LIVE BAIT, Christmas Turkey and DIRT! Festival Distribution of Vancouver has been distributing albums for The Arrogant Worms since 1993. The Worms are consistently on their top selling charts.

The Arrogant Worms have toured extensively since 1992 developing a loyal International fan base resulting in no fewer than a dozen websites dedicated to their music. They have performed at such acclaimed venues as The Lincoln Center’s Out of Door’s Festival in New York City and The Disney Institute in Orlando, Florida.